The heavy-handed arrest of Pastor Artur Pawlowski (pictured above) is perhaps the most outrageous incident, but it is only the tip of the repression iceberg as Canada's covid cops openly declare war on the Freedom Convoy truckers. Pastor Pawlowski was dragged from his home and hauled off to prison on the morning he was scheduled to speak to the anti-mandate truckers. And in the days that have followed, the list of police and elite extremism has grown rapidly.

Clad in full paramilitary gear, Ottawa police made their “strongest show of enforcement yet” when they raided a parking lot serving as a staging area for anti-mandate protesters. The police confiscated at least a tanker of fuel and arrested two protesters. “Any other place that they’ve displaced to, we are attacking that as quickly as possible to make sure they don’t take root again.” said Ottawa Police Chief, Peter Sloly.

"Attacking"? It is surely time to remind the cops that their job is to SERVE and PROTECT the people, not to attach them - let alone boast about it.

The move by the police to start illegally confiscating fuel is clearly designed to literally freeze the truckers into surrender. They rely on the diesel heaters in their cabs to keep them safe from the bitter cold of the winter nights.To make the threat even more cruel, many of the truckers have their children with them.

Ottawa Police tweeted: “Anyone attempting to bring material support (gas, etc.) to the demonstrators could be subject to arrest. Enforcement is underway.”  And according to Ottawa City News, Canada’s law enforcement agencies are launching “enhanced intelligence operations” against the protesters, collecting financial and digital information “that will be used in criminal prosecutions.” 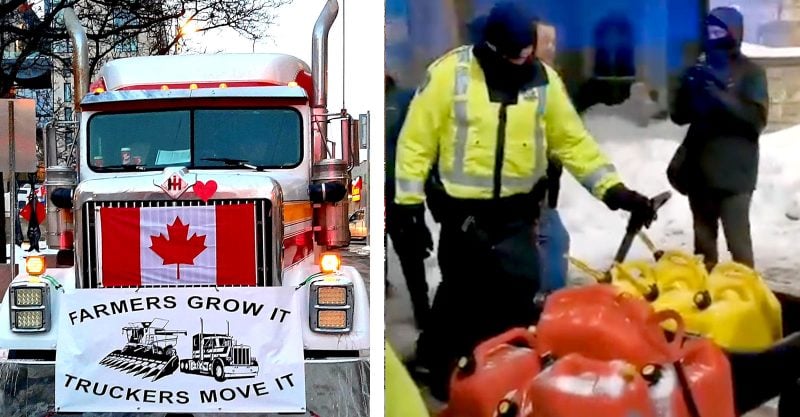 There are now reports, however, that Ottawa fire department trucks have done the rounds, resupplying the truckers with fuel. If this is true, then the liberal elite are looking increasingly isolated and vulnerable.

Last week, GoFundMe seized millions of the trucker’s funds, but protesters are receiving support across the border in Alaska, where Alaskan truckers have formed their own anti-mandate convoy.

The intimidation and pressure, however, only seem to be spurring the resistance. Protesters blocked the busiest international crossing in North America as Freedom Convoy drivers hindered travel on Monday at the Ambassador Bridge that links Windsor, Ontario and Detroit. Canadian-bound traffic was still shut down yesterday, while U.S.-bound traffic was flowing with limited bridge access.

Meanwhile, Canada’s Justice Centre for Constitutional Freedom has warned that Ottawa police would be breaking the law if they attempted to intimidate people who bring food or other supplies to truckers who are peacefully exercising their Charter rights and freedoms in Ottawa.

A fresh sign of growing support for the protest came as farmers moved their tractors and heavy farming equipment to the border crossing between Alberta and Montana, helping truckers “completely obstruct” border crossings. Canada's liberal elite should be getting very worried over the possibility that their repressive actions will lead to even more militant actions by the freedom fighters. If groups of trucks and tractors were to show up at the entrances to fuel refineries and distribution points, and also picketed power stations to urge workers not to go in for shifts, then it would quickly become obvious that Trudeau's petty and cowardly tyranny threatens to freeze not just thousands of truckers, but the entire country. That'd do it!