A decade before he was crucified, Jesus sailed on a trading ship and found inspiration in Cornwall and southwest England. That’s the theory of a very plausible and well-argued book.

In it Blake asks if Jesus ever walked upon England’s “mountains green”, words inspired by the myth that a man called Jesus wandered through British vill­ages a decade before He was crucified. But now a book suggests those words point to a truth hidden for centuries.

By collating stories from local legends, architectural evi­dence from two ancient churches and analysing letters from our earliest historians, author Glyn Lewis believes the tale of Jesus’s visit to Britain is true.

The key to it all is Jesus’s family. Joseph of Arimathea, Jesus’s uncle, was a metal trader who travelled Europe. He was a trustworthy businessman – in Mark 15:43 he is described as an “honourable counsellor”. 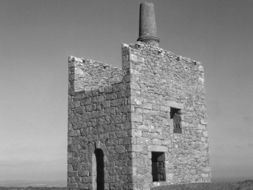 Jesus and his uncle Joseph stopped at Ding Dong mine

“Joseph of Arima­thea almost certainly came here to buy tin in Cornwall and copper and lead in Somerset,” says Lewis, author of Did Jesus Come To Britain? “In the Bible Joseph of Arimathea approached Pon­tius Pilate for Jesus’s body after the crucifixion.

The law then stated that only a close relative could have done this, which shows he and Jesus clearly knew each other well. Pilate also gave Joseph time in a meeting, which showed he wasn’t just ‘anybody’ but a respected member of the community.”

It is interesting that both places in Britain where Joseph traded have legends saying that another man, namely Jesus, was once there. Lewis estimates that when He came to Britain Jesus was aged 12 to 28. He was crucified aged 30.

Miners’ songs in Corn­wall mention Joseph and Jesus and folk songs from Somerset also tell of the days where He walked among the people of Glastonbury.

“Britain is one of the very few countries that has songs and hymns about Jesus being here,” Lewis explains. “There are so many that it just seems strange they would all be fictional.”

Carols like I Saw Three Ships mention Christ sailing into the country. Lewis says they are “un-likely to be fanciful” because they “survived in the canon of carols”.

It is, however, difficult to find concrete evidence. “We have no written history until about the 6th century when famed histor­ian Gildas started writing but I think he refers to Jesus’s time in this country.” St Gildas, who lived from AD516 to AD710 wrote that: “Christ afforded His light to our island during the height of the reign of Tiberius Caesar.”

Here is what is known about Jesus’s possible route here. He  either set off from the Palestinian ports of Tyre or Sidon, though Tyre is more likely as it is mentioned in the Bible that Jesus healed a sick girl there. Then the ship would have sailed through the Mediterr­anean and Straits of Gibraltar.

Bearing north through the Straits of Biscay, it sailed into the Channel, where winds took it to the Cornish coast, Joseph’s first stop along his trade route.

There were rich seams of tin to be found in mines near Penzance, one of them being the Ding Dong mine near Penwith, Cornwall’s oldest, where, Lewis says, Jesus and His uncle talked to miners and shared food and drink.

Near Truro stands St Anthony in Roseland church, a pretty, steepled building which looks like many others of its era. It is not until the hieroglyphic carvings around the 1,000 year-old arched south door are examined that its secret is revealed. An analysis of their meaning by an archaeologist in the Seventies revealed striking results. Lewis writes: “He interpreted the pictographs as telling of Jesus’s birth and his visit to Cornwall.”

A more detailed analysis of the pictures tells us even more about Jesus’s life. “The lamb and the cross face the rising

sun, meaning that he was here in his early life. Because it is on the left of the centre line it indicates He was here just before the turn of the year, probably December.”

If the inscription is real, according to Lewis, “this arch is one of the few ancient records that exist to support the legend that Jesus visited Britain”. The inscription also reveals that Jesus and Joseph had, while sailing into the port, encountered difficulties in their boat.

Lewis thinks that if they had been shipwrecked they would have “erected a shrine to give thanks for their deliverance from the sea” and this shrine is where  St Anthony’s church is today.

If Jesus and His uncle landed in Cornwall they would have gone  on to Somerset. This was a well-established route for metal traders like Joseph and he would have sailed his ship around the Cornish coast and moored near Burnham or Uphill in Somerset. Lewis writes, they “might have called in at the mouth of the Camel estuary in Cornwall” to replenish supplies of food and water. There remains to this day a well on this harbour which legend has it was where Christ and His uncle stopped.

“On the bleak, windswept downs of St Winver, where one would hardly expect to find fresh water, there is a well known as the Jesus well,” Lewis writes. “It’s unusual to find water on the headland and it’s the only well that bears His name in the country.”

The St Joseph’s Chapel in Glastonbury Abbey is where, according to myth, Joseph later brought the Holy Grail, the cup from which Christ drank at the Last Supper. It too has a connection to Christ’s time in Britain.

“Jesus had links to the Druids,” Lewis says. “I believe He stayed a while in Glastonbury to study for his ministry. While Joseph was trading I think Jesus found people in Glastonbury, a seat of Druid learning, who thought much like He did.”

The Druids believed in one God and the Holy Trinity. More importantly, they searched for a saviour, whom they called Yesu.

“I think He stayed there for a while to study. I certainly think He was away from Nazareth for some time because in the gospel when He returns people don’t recognise Him and He’s far wiser upon His return so they also ask Him where he obtained His learning.”

After the crucifixion Joseph came to Britain in fear for his life because he had entombed Jesus’s body. He built a chapel on the site of Jesus’s Glaston­bury home, which is today a church bearing the name of St Joseph. This chapel was seen by St Augustine, who was sent to Britain by Pope Gregory the Great to convert people to Christianity. In 597 he described a church “constructed by no human art but by the hands of Christ himself”.

Lewis says: “The facts do come together and I’ve come to the conclusion that, yes, He did come here. It doesn’t conflict at all with the gospel stories and I think it’s important for Britain to have this myth. To think that Christ came here in His formative years makes Britain a holy land.”