Being a patriot makes you a ‘right-wing extremist’ unsuitable to serve in the Army in Britain. And now the same sort of liberal military bureaucrats in the USA want to force out sailors who respect their elected President!

The Navy says it is reviewing whether service members violated Defense Department policy or regulations by wearing a uniform patch with the words “Make Aircrews Great Again” during President Donald Trump’s visit to their ship in Japan.

The phrase emblazoned on the patch, along with a likeness of Trump, is a play on his campaign slogan.

The military has uniform dress codes and regulations against ‘partisan political acts’ while in uniform.

But if service members can’t openly support the current president of the United States, what does that say about the Navy?

What is going on here? 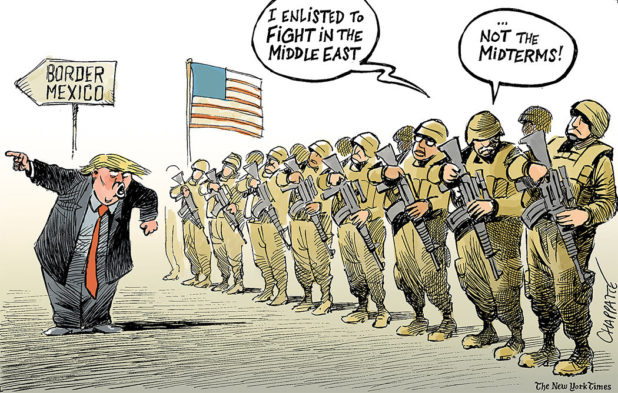 The time may be near that the US flag itself is removed from military uniforms and vehicles. After all, on the other side of the Pond, Britain’s ruling elite have made having a tattoo of the country’s national flag grounds for rejecting a potential recruit – on the grounds that being proud of the flag suggests ‘extremist’ or ‘racist’ views and/or that it may ‘offend’ Muslims or other immigrants.

We all remember the New York Times cartoon, suggesting that the troops wanted nothing to do with defending the US border, and instead signed up to fight for foreign vested interests (and to boost the profits of the arms corporations) in the Middle East.

At the same time the NORTHCOM Chief said that the invasion on the US-Mexico border shouldn’t have anything to do with the military, and that he and the other neocons are anxious to get troops back to their main mission, which is fighting wars on behalf of the Likud fascists in charge of Israel.

The liberals, meanwhile, think that the US Army should be an extension of the United Nations, and police the world for the New World Order at the expense of the long-suffering American taxpayer.

So why exactly are the troops wearing American flags, if they aren’t there to defend the borders of America? Shouldn’t they be wearing blue helmets? Or Israeli flags? Or the logos of Lockheed or Haliburton?