It’s medical madness: Your doctor’s office may require you to list your “current gender identity” and “sexual orientation” before getting treatment.

It’s happening now in Massachusetts – and probably other places.

And they want “social justice” information about you that has NOTHING to do with medicine.

A few weeks ago, a woman in central Massachusetts went to her regular doctor’s office for a routine checkup. But this time, she – and the other patients who came – were told to first fill out a bizarre form.

Starting off, she was told to list her “current gender identity,” her “sex assigned at birth,” and whether she is gay, bisexual, or straight.

They also wanted her to answer a variety of other unusual and intrusive questions such as her her annual income, family situation, and housing status.

The sheet says at the top, “We are required … to collect data each year about the patients we serve.” Data? Note that it doesn’t say that this datais required, or if it’s a legal requirement. We couldn’t find any state or federal laws (yet!) that mandate this. 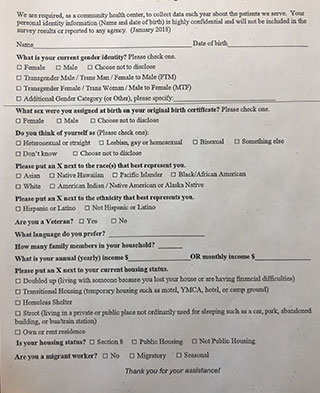 This is the sheet patients are being told to fill out!

The doctor’s office isn’t located in a nutty left-wing part of Massachusetts such as Cambridge or Provincetown, but in a fairly conservative region. The state Senator there is a Republican.

Welcome to the Brave New World of politicized medicine: incorporating the anti-science, radical LGBT agenda into health care. It’s coming to a doctor’s office and hospital near you. It has been marching through the medical profession for well over a decade. Like the rest of left-wing ideology, LGBT doctrine allows no disagreement. The movement is brutal toward those who disagree with its clearly anti-scientific mandates. 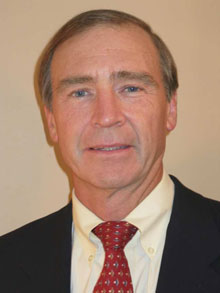 Back in 2015, Dr. Paul Church, a prominent urologist in Boston, was fired from several major hospitals for simply questioning one hospital’s support for “gay pride” activities and observing that homosexual behavior carried a high risk of medical problems. It became an international news story, but the hospitals refused to relent.

Perhaps the most worrying thing is that this continued and rapid advance of the LGBTQ+ cultural Marxist perversion revolution is happening despite Americans having elected a President they believed would fight back against PC madness. It was MAGA, not Make America Queer! And just imagine how bad things will get when the Democrats get back into the White House…..