The increasingly out-of-touch Mayor of London, Sadiq Khan, is facing a massive backlash over his attitude during a TV interview on the city’s knife crime epidemic.

Pressed on the crisis, arrogant Khan rolled his eyes and said ‘I’ve done all I can’ as he was grilled over his failure to tackle London’s knife crime epidemic.

His dismissive attitude is particularly shocking given his own key role in the policing policy change that has fueled the violence: Four years ago, he pledged to do ‘everything in my power’ to cut stop and search. The old policy has been consistently attacked by the left as ‘racist’.

With the police under resulting pressure not to stop and search young men from ethnic minorities, black youths are massively over-represented both among the perpetrators and victims of knife crime.

There have been 21 murders in London alone so far this year, with fatal or near fatal knife attacks in the capital virtually every single day.

The Mayor of London made the vow to restrict stop and search even further in 2015 while on the campaign trail, claiming the tactic was ‘overused’ and undermined public confidence in the police.

In his Sky News interview today, Mr Khan said he had done ‘as much as I am allowed to do under the law’ to curb knife crime by raising council tax three years in a row and using money from business rates to invest in policing and youth services. 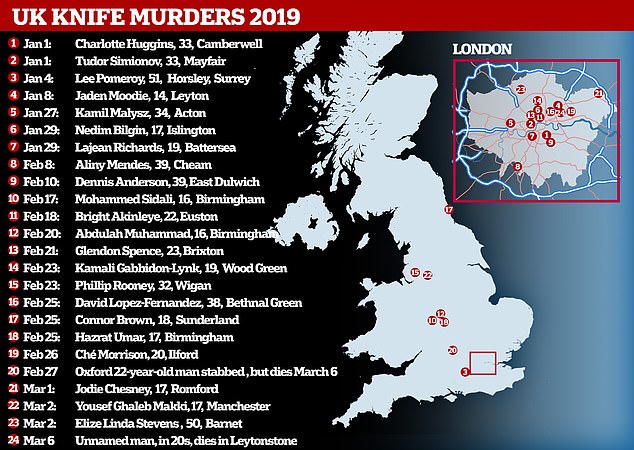 Instead, he insisted cuts in central government funding had left him hamstrung. ‘The investment we are putting in doesn’t fill the massive hole left by the Government,’ he said in an interview with Sky News. Around 75 percent of his police budget comes from central government, with the rest coming from council tax and business rates.

At this point Sky’s Sarah-Jane Mee interrupted, saying: ‘You keep shifting it onto central government.’ Mr Khan then rolled his eyes in frustration, before the presenter asked why he was not ‘taking personal responsibility’ for the issue.

The comments by Sadiq Khan sparked anger, with Susan Hall, a Tory member of the Greater London Assembly, telling MailOnline: ‘The fact that Sadiq Khan rolled his eyes when an interviewer dared to question him about London’s crime epidemic really does sum up this Mayor’s complacent attitude towards violent crime.

‘Throughout his mayoralty Khan has consistently failed to get a grip on crime, focusing instead on obsessing about Brexit and rushing out gimmicky policies like his TfL food ad ban.’

Others vented their fury on Twitter, where one user accused Mr Khan of being ‘out of his depth’.

Freddie Shepherd tweeted: ‘@SadiqKhan have some humility man. It’s not all Governments fault. You have a budget.

And Adam Goldie added: ‘What a terrible human to roll his eyes whilst talking about a knife epidemic that he is too inept to control. What an awful awful human.’

It is certainly true that Tory policing cuts are part of the problem, but the government’s cowardice in following along with the left’s ‘anti-racist’ hysteria against stop and search and against tough sentencing for carrying knives is the biggest problem.

The only thing that can stop Britain’s knife epidemic is routine and widespread stop and search, targeted at the ethnic groups known to be at the core of the problem, and backed up by mandatory five-year sentences without remission.

Oh, and closing the door to migration from ‘cultures’ and countries where high levels of violence are routine.

Which explains, of course, why the political elite will continue to blame each other, but do nothing…..