While the evolution of Google’s YouTube from a free expression platform into something entirely different has been underway for a while, it just took another step in a very short-sighted and restrictive direction. NBC News reports:

YOUTUBE HAS ANNOUNCED THAT IT WILL NO LONGER RECOMMEND VIDEOS THAT “COME CLOSE TO” VIOLATING ITS COMMUNITY GUIDELINES, SUCH AS CONSPIRACY OR MEDICALLY INACCURATE VIDEOS…CHASLOT SAID THAT YOUTUBE’S FIX TO ITS RECOMMENDATIONS AI WILL HAVE TO INCLUDE GETTING PEOPLE TO VIDEOS WITH TRUTHFUL INFORMATION AND OVERHAULING THE CURRENT SYSTEM IT USES TO RECOMMEND VIDEOS.

There’s a lot to unpack here so let’s get started. First, it appears YouTube has announced the creation of a new bucket when it comes to content uploaded to the site. It’s no longer just videos consistent with company guidelines and those that aren’t, but there’s now a category for “conspiracy or medically inaccurate videos.” This is a massive responsibility, which neither YouTube or anyone else seems fit to be judge and jury. In other words, YouTube is saying it’s comfortable deciding what is “conspiracy” and what isn’t. Which brings up a really important question.

“Conspiracy” and covering up conspiracies is a fundamental part of the human experience, and always has been. It demonstrates extreme hubris for a tech giant to claim it can differentiate between a legitimate conspiracy to explore, versus an illegitimate one. One person’s righteous investigation is another’s conspiracy theory, with Russiagate serving as an obvious contemporary example.

Going back to the early 21st century, we witnessed a major conspiracy to start a war in Iraq based on lies; lies which were endlessly repeated uncritically throughout the mass media. Even worse, General Wesley Clark described an even larger conspiracy which consisted of starting multiple additional wars in the aftermath of 9/11. This conspiracy is ongoing and has continued to move forward in the years since, through both Republican and Democratic administrations.

It’s pretty clear what will end up happening as a result of this tweaking to YouTube’s recommended videos AI. The “conspiracies” of your average person will be pushed aside and demoted, while government and mass media lies will remain unaffected. Google will assume mass media and government are honest, so government and billionaire approved propaganda will be increasingly promoted, while the perspectives of regular citizens will be pushed further to the margins.YouTube is simply not a platform anymore, but rather a self-proclaimed arbiter of what is ridiculous conspiracy and what is truth.

While YouTube says videos it deems conspiracy will still be available via search, it’s not a stretch to imagine this is just the first step and before you know it certain categories will be banned from the site entirely. Either way, I think there’s a silver lining to all of this.

As I outlined in a recent post, U.S. tech giants, particularly Facebook, Google and Amazon, aren’t simply private companies. They appear more akin to quasi-government entities that increasingly view themselves as instrumental gatekeepers for a discredited status quo.Moreover, their primary business models consist of mass surveillance and violating our privacy.

Ultimately, I think the increasingly nefarious and desperate behavior of these tech giants will lead to their demise. More and more of us have looked under the hood and seen the seedy and privacy-destroying nature of these entities. We’ve also seen what it’s like to have genuine free expression on the internet and we don’t want to turn the web into another cable news where Facebook, Google and Amazon become the new CBS, NBC and ABC. If we do, then the entire promise of the internet will have turned out to be a giant waste. 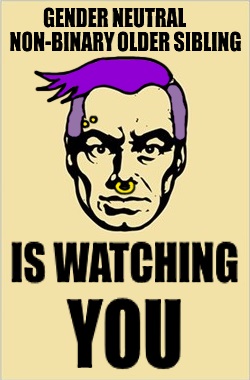 But I don’t think that’s going to happen. I think most of us have had a taste of what’s possible, and agree that free speech and expression on the internet, the good, the bad and the ugly, is better than an internet censored by tech companies and their billionaire executives, who will always be biased toward the status quo point of view. It’s still not clear which platforms will emerge to replace the tech giants, but it seems fairly clear to me the best days are over for these companies, and it cannot come a moment too soon.