The international power elite have taken a bit of time off from their endless scheming to turn the peoples of the West into serfs on their global LGBTQ+ plantation. Instead, they’ve turned their attention to China. There’s now a concerted and blatantly open effort by Deep State agencies to forment violent revolution in Hong Kong.

As part of this operation, the’right-wing’ in the US and UK is now overrun with paid shills claiming that it is a good thing for the Jewish controlled US State Department to overthrow the government of China by instigating terrorist riots by pro-homosexualist liberal SJWs in the Chinese province of Hong Kong.

“Revolution now!” has been a big talking point on the neo-con website Breitbart, which is otherwise good on many issues. What is more shocking, however, is that this has infiltrated far-right and Christian circles.

Among those now shilling for the State Department is Joey Gibson, the leader of Patriot Front, who went to Hong Kong n July to shill and attempt to incite the rioters to violence. Mr Gibson has failed to explain why he thinks it is acceptable to go and meddle in China, at a time when the LGBTQ+ assault on Christian values and rights in the USA is becoming more oppressive by the day.

Instead, he is pushing for public opinion in America to fall into lockstep with the Deep State’s planned confrontation with China. To put it bluntly, he’s helping to beat the drums for war.

When has This Ever Worked Out?

Anyone tempted to fall for this nonsense needs to reflect on how the other modern-times neo-con/military-industrial complex foreign policy adventures have ended up: 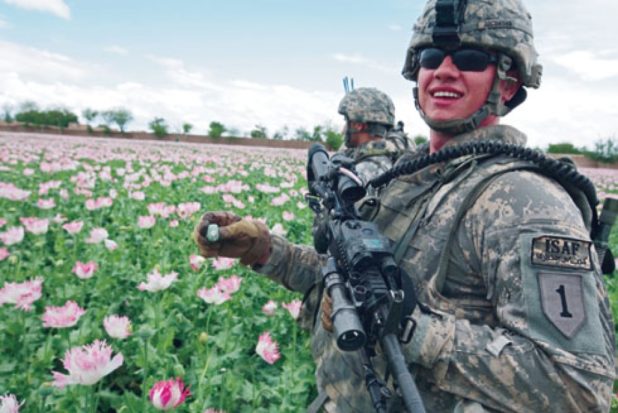 Following the Saudi attack on 911, we invaded Afghanistan. Many soldiers died, and our country was flooded with heroin.

George W. Bush told us that Saddam Hussein did 911 and that he was getting ready to nuke us, so we invaded Iraq. Many US and British soldiers died for no reason. The chaos produced by the elite’s removal of Saddam led directly to the rise of ISIS, the slaughter of Christians in Iraq and Syria, and a constant threat of Islamist terrorism that the elite have used as an excuse to clamp down on civil liberties across the board.

Because of “protests” similar to those we are seeing in Hong Kong, Barack Obama and David Camoeron bombed Libya to help Islamists terrorists overthrow the government and murder its leader, Muammar Gaddafi. This resulted in a massive invasion of Europe by Africans, which is still ongoing today.

The Obama Administration funded a terrorist uprising in Syria, the Islamic version of what the Trump Administration is currently doing in Hong Kong. This resulted in a massive flood of refugees into Europe, which peaked in 2015 when over two million Syrians, Pakistanis and Afghanis marched into the continent through Turkey.

The Obama Administration funded costumed neo-Nazis and others to riot and overthrow the government in the Ukraine, paying them 50 euros per day to throw firebombs at the cops. This resulted in Vladimir Putin being forced to annex Crimea in order to protect his people and interests there, which resulted in the total collapse of relations between the West and Russia. This could ultimately escalate into a world war.

Moreover, the Ukrainian situation directly laid the groundwork for the Russiagate hoax and the liberal cripplingof Donald Trump’s presidency. That hoax was also used to support the liberal and mass media campaigns of mass censorship on the internet.

No one can really calculate what the backlash from a war with China would be, but we can guarantee you, it would be much worse than all of these combined.

Not a single one of these interventions has ever been good for you. These neocon operations are about strengthening powerful lobbies and enriching mega corporations. Sometimes, war is a necessary evil. But NONE of these Deep State wars has been a Just War, and their plan to use our taxes and our sons and daughters in a war on China is just as evil.

Don’t fall for their propaganda! More than that, do everything you can to help keep public opinion on the side of non-intervention in foreign quarrels and for peace! Deus Vult!