Notre Dame: Looks Who's happy to see The Blaze

Notre Dame: Looks Who's happy to see The Blaze

The destruction of Notre Dame Cathedral in the heart of Paris tonight has shocked the entire Christian world. Our thoughts go out most of all tonight to the faithful Catholics of France as the great symbol of their faith and history crumbles into ashes before their appalled eyes. 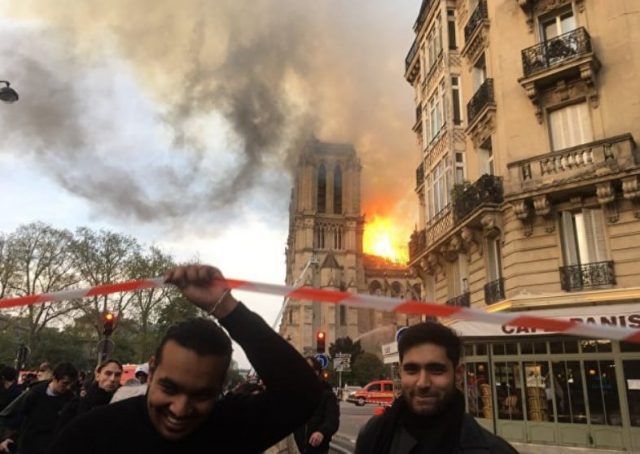 But, as our picture above shows all too clearly, not everyone in Paris has been in tears as they watch the inferno.

And while the fire brigade and authorities have already declared that the fire was accidental (one wonders how they can be so sure when no forensic investigation will be possible for several days) the fact is that France is in the grip of a wave of vandalism and arson, apparently perpetrated by a mixture of Salafist Islamist fanatics and Satanist-influenced youths.

While Notre Dame is undoubtedly the most well-known landmark to be affected, Paris’ second largest church, Saint-Sulpice, briefly burst into flames on March 17, the fire damaging doors and stained glass windows on the building’s exterior. Police later reported that the incident had not been an accident. The same is true of several other arson attacks on major churches in France so far this year.

“The images of flames in Saint Sulpice church this weekend are one more example of the violence committed against Catholics,” said Philippe Gosselin and Annie Genevard of France’s National Assembly, tying the incident into a wider trend of attacks on Catholic places of worship.