In his rambling manifesto, Brenton Tarrant claimed to have had contact with Breivik, although Breivik's lawyers dispute his claims. A question and answer section featured in his manifesto claims he received authorisation for the terrorist attack from a group calling itself "Reborn Knights Templar." 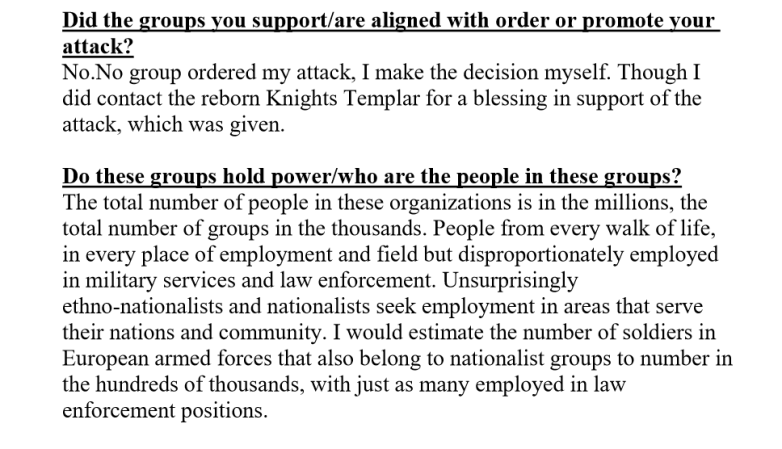 CSMonitor reported in 2012 that Breivik claimed to be a member of the “reborn Knights Templar.”

Breivik claimed the “Reborn Knights Templar” is “a leaderless network, made to be self-driven cells” and said “For militants, [Knights Templar] is meant to be a version of Al Qaeda.”

But The Telegraph reported that Breivik’s Knights Templar was an idea he created “from a character in the computer game World of Warcraft” and was something that “existed only in his head.”

Tarrant's manifesto is not only poorly written but the lone nut appears to be ideologically deranged. He makes the claim that Black Conservative Candice Owens was a key thinker in shaping his ideology and goes on to say that his ideal state would resemble Communist China. Pop singers Michael Jackson and Madonna are also mentioned in his manifesto.

From there he delves into the world of white supremacist madness. Whilst carrying out the attack, the Pagan, neo-nazi black sun symbol was attached to his jacket.

The cries of help of one injured woman (she was killed outside the mosque, shot from point black range) was one of the most grotesque and heart-breaking images that one is likely to see.

To attack any denomination of worshippers is an act of pure evil. Unlike the satanists, pagans and white supremacists of the Alt-Right, the mission of the Templars is grounded in our Christian ethos. We immediately condemned the attack in Christchurch (and other terrorist attacks on Muslims) as strongly as we condemn attacks on Christians in the West.

The Knights Templar International is on record condemning the racist ideology that drove this clearly insane individual to slaughter innocent worshippers. Among our thousands of members are men and women of various races and nationalities. We have repeatedly condemned racism in all forms as ungodly and contrary to the teachings of Christ.