The Knights Templars have been warning for a number of years of the growing persecution of Christian farmers in South Africa and now, at long last, President Trump has addressed the growing crisis facing South African farmers as they face the prospect of land confiscations. He has instructed his Secretary of State to keep a keen eye on the developments there.

AfriForum welcomes Pres Trump’s announcement that the USA will investigate expropriation in SA.

The civil rights organisation AfriForum welcomed American president Donald Trump’s announcement on Twitter that he had requested Mike Pompeo, US Secretary of State, to thoroughly investigate the illegal occupation of land and farms, expropriation as well as the widespread murder of farmers in South Africa.

Trump’s announcement follows only three months after AfriForum sent a delegation to the USA to inform the Cato Institute (a prominent American think tank), Tucker Carlson (Presenter of Fox News) and various other institutions and politicians of the situation in this regard in South Africa.

Kallie Kriel, CEO of AfriForum, thanked the Cato Institute, Tucker Carlson and every other role-player in the USA that took a stand to make the ANC’s plans to amend the South African Constitution to enable expropriation without compensation, as well as the farm murder crisis in SA, part of America’s public agenda.

“The ANC’s decision, as announced by Pres. Cyril Ramaphosa himself, has made a farce of the local participation processes and that is why AfriForum is, as a last resort, continuing to mobilise international pressure for the protection of property rights in South Africa.” 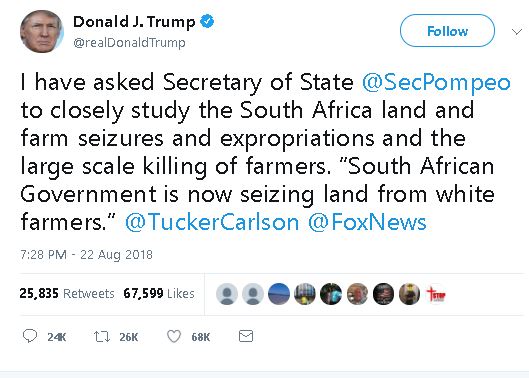 But the South African Government hit back and accused US President Donald Trump of seeking to sow division after he took to Twitter to put the Marxist-run State on notice.

A spokeswoman for the South Africa's president said Mr Trump was "misinformed," and on the official Government Twitter said: South Africa totally rejects this narrow perception which only seeks to divide our nation and reminds us of our colonial past.

Last month, South Africa said it would go ahead with plans to amend the constitution, allowing land to be expropriated without compensation.