After decades of demanding money with menaces and funding its ultra-liberal agenda with taxpayers’ money, the BBC is DOOMED! The average Brit now watches Netflix and YouTube for 52 minutes every day – beating the average 48 minutes watching BBC1. The shift away from the BBC is even stronger among young people aged 18 – 34. 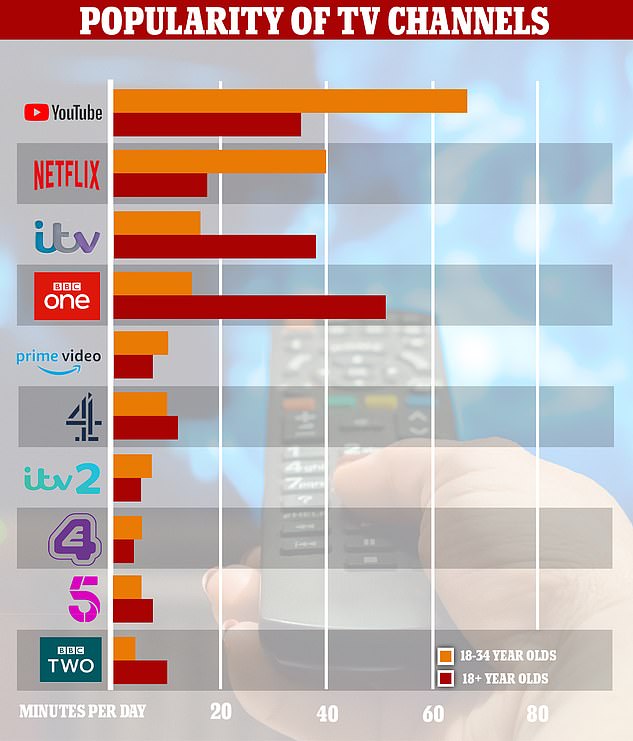 Netflix and YouTube are now among the four most popular television platforms in Britain.

The streaming giants have also eclipsed BBC Two and Channel 4 in a huge shift in the nation’s viewing habits.

The number of households that signed up to paid-for services, including Netflix, Amazon Prime Video and Now TV, rose from 11.2million (39 per cent) last year to 13.3million (47 per cent) in 2019.
Young adults, aged 18 to 34, had the US giants as their most-watched viewing platforms, according to a report by the watchdog Ofcom. They spent an hour and four minutes on YouTube and 40 minutes on Netflix.
Nearly half of households already subscribe to a TV streaming service, Ofcom also found.

Traditional viewing still accounts for most TV time (three hours and 12 minutes a day) – although this is down 50 minutes on 2010, the watchdog found.

But daily streaming rose by seven minutes last year to 26 minutes. Young people, who spend an hour a day on YouTube, are leading this shift in habits.

Yih-Choung Teh, from Ofcom, said: ‘The way we watch TV is changing faster than ever before. In the space of seven years, streaming services have grown from nothing to reach nearly half of British homes.

Some 38 per cent of online viewers can imagine not watching traditional TV at all in five years’ time.

The shift is ominous for the BBC, especially when it is courting even deeper unpopularity by forcing millions of pensioners to pay for TV licences, and displaying ever-greater bias against Brexit.

Assuming Boris Johnson does take Britain out of the EU, and wins a thumping big majority at the nearly-inevitable early General Election (as he will if he does a deal with Nigel Farage), then the wave of privatisations which will be unleashed by the right-wing think-tanks behind his administration could bery well start with a massive and long-overdue reform of the BBC – complete with scrapping the licence fee and making the greedy monster stand on its own feet rather than robbing pensioners.

It would be a very popular move. Indeed, a commitment to abolish the licence fee – for everyone, not just pensioners – could be an election-winner in its own right. One way or another, the outdated BBC’s privilege position is doomed. It’s just a matter of time!