To fight school shootings, Utah allows teachers to carry a gun at school – and many are choosing to arm themselves and are taking combat shooting courses as preparation.

Ryan Ferree, 33, is a keen shooter. If he could, he would shoot until the 160-decibel sound of a gunshot didn’t faze him. He would shoot so often that he wouldn’t freeze up if he had to aim at somebody he knew.

Ferree wasn’t always interested in guns. He got his concealed-carry permit in March, after becoming a teacher. Three months later, in June, he’s taking a local combat shooting course offered to teachers in St George, Utah.

Utah is one of 14 US states where teachers can carry a gun at school. Following the shooting that killed 17 people in Parkland, Florida, Rowdy’s Range started offering the class – which normally costs almost $800 – free of charge to teachers.

One of the course instructors, Brett Pruitt, 38, believes that teachers have the right to be armed if they choose: “We give our children to educators for four to six hours a day and trust them with their safety. My personal opinion is we should give them the means to [keep those children safe].”

School principals aren’t allowed to ask teachers whether they carry a weapon on premises, so there’s no official figure on how many do, but gun rights groups guess it’s around 1%. In March, classes were often fully booked, but when I visit, five people turn up in total across two separate 12-person classes. 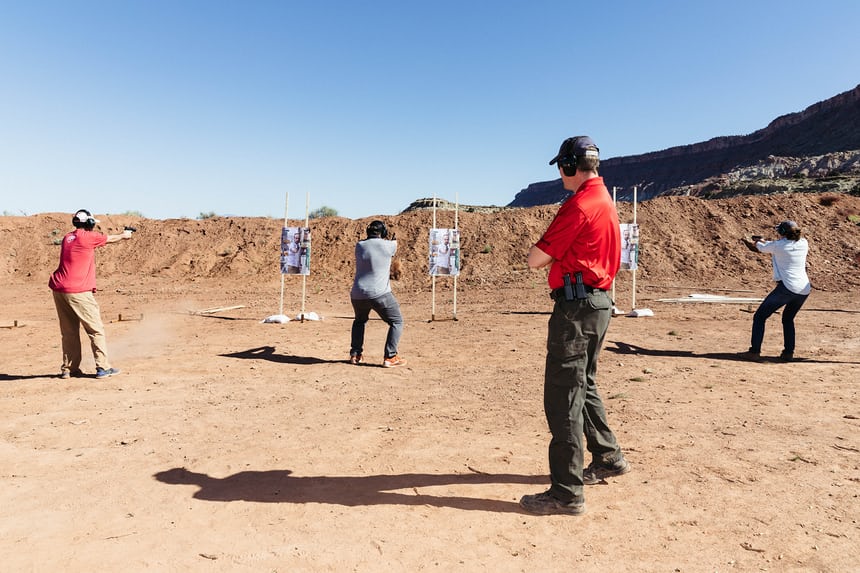 Regardless, range owner Rowdy Reeve, 41, sees it as his responsibility to provide the course: “If teachers are going to take a weapon into school, they should be trained to use one,” he says.

Ferree decided he wanted to carry after his first lockdown drill. The drills are designed to prepare teachers and students for an active shooter situation; the students hide in blind spots in their classrooms while someone pretends to force entry. A former military man, Ferree didn’t like having to hide in the corner: “It makes me sick to think that if someone came in and tried to harm my kids, I’d be nothing more than a meat shield.”

He is one of the many teachers emboldened by President Trump’s proposition that highly trained teachers might be able to stop shootings in their schools. For Ferree, it’s all a matter of practice: “I didn’t know how to teach math before I tried it,” he says.