Social media companies have been censoring right-wing dissidents at an accelerating rate. It’s been talked about a lot. Yet, still nobody within the power structure claiming to be right-wing seems to care about it at all.

It never used to exist and started very slowly, gradually gaining speed to what has become a never-ending crescendo. It’s unlikely that the same magical invisible hand of the free market which libertarians love to talk about will unexplainably somehow solve this problem. When too many users switch to new platforms like Gab, the entirety of international finance hops onboard the crusade and does their best to help shut them down. 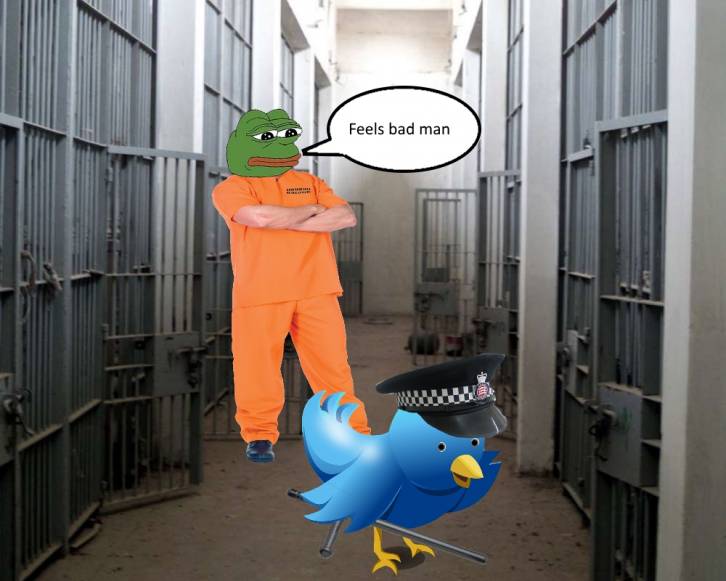 Regardless where somebody fits in the spectrum between Alex Jones and Andrew Anglin, tech monopolies have continued to shadow ban and outright delete any accounts promoting dissident right-wing political content. Slowly and gradually, it’s becoming more apparent. The content being banned is no longer the primary target. The real target of the shut downs is everyone who engages with the public and spreads the material around the internet for all to see.

Twitter trolls were not banned because they messaged “learn to code” to the recently laid off Huffington Post journalists. The crime committed was not owning the libs by making light of the double standard that was held against them. The biggest crime was that right-wing Twitter accounts came together en masse, gaining national news coverage for a show of force using a slogan curated by the alt right.

For the full Templar Intelligence Report on this problem, simply click here.

Similar phenomena have happened in the past, such as the NPC meme and “it’s ok to be white.” It always goes the same way: a meme or idea is created by one of /our guys/, it is then propagated within alt-right and alt-lite circles (message groups, Gab, /pol/, etc) until a smaller yet influential online personality/website increases its visibility. From there it spreads like wildfire, eventually pressing in to r/The_Donald and normie spheres; it can even reach boomers when national news outlets are forced to react.

This ground work was organically created and massively utilized in order to get Donald Trump elected. It would be impossible for anyone to politically use this mass online social frame work without embracing, internalizing, and supporting ideas from the “new right.”

For this reason alone, the old vanguard must put a stop to it by any means necessary. This is why NPC Twitter accounts and people involved with the learn to code campaign were banned. This is why Discord banned, leaked, and doxxed alt right accounts and servers directly to antifa. They weren’t banned for what they posted, they were banned for their collective strength and influence.

Last week, YouTube made a blog post regarding their new algorithm updates for YouTube recommendations, “including taking a closer look at how we can reduce the spread of content that comes close to—but doesn’t quite cross the line of—violating our community guidelines.

To that end, we’ll begin reducing recommendations of borderline content and content that could misinform users in harmful ways—such as videos promoting a phony miracle cure for a serious illness, claiming the earth is flat, or making blatantly false claims about historic events like 9/11.”

This isn’t anything new or unexpected. I wonder if acting Attorney General Matthew Whitaker could issue an arrest warrant for YouTube’s CEO for coming close to, but not quite crossing the line of breaking the law. Under the guise of flat earth and 9/11 conspiracies, YouTube will be removing any videos suspected of wrong think from your recommendations.

Many alt right and right-wing political dissidents have already had their channels and videos deleted. Those channels that have not been banned have had their accounts either shadow banned, flagged for adult content forcing users to sign in, or extremely buried and hard to find. Go look up “year 2018 – Nordic resistance movement” by Norden Media on YouTube. Like many other right-wing videos, you must be signed in to watch, and if you’re watching on YouTube’s mobile app it is impossible to like, add to a playlist, or even share.

The only way to share is to search for the video in a browser, sign in, and copy the URL. There are countless videos in the same state, and the only way to find them is to know exactly what you’re looking for or have video’s URL be sent to you.

Younger people watch more YouTube videos than older generations watch television. The vanguard establishment does not want the younger generations getting their news or expanding their political ideology from sources they can’t control. Even more so, they definitely do not want those younger people engaging with others who hold the same beliefs and ideas, let alone working together to spread them.

With the continued crack down by tech oligarchs promoted by the mainstream media and the judeo-left, it will be almost impossible for Trump to win again in 2020. Furthermore, it will be extremely difficult for any future new-right candidate to get his message out and win in the future. No intelligent modern Republican believes that returning to talking points created by National Review and Turning Point USA will win them nationwide elections.

Despite this, they would rather lose an election than be called a racist or sexist. They would rather lose gracefully hoping they don’t get any negative press coverage. One of the most important things the presidential election of 2016 has shown America and the entire world, is the influence of Alt Right Memosphere. The information war was waged and won on 4chan, Twitter, YouTube, Reddit, Facebook, and other social media sites.

No matter how many hashtags they stopped from trending or how many accounts were banned, the old guard narrative creators were overwhelmed and unable to compete with an online army dedicated to victory. When it happened, they were totally unprepared.

Today, they have had countless new hires and algorithm changes to stop the next information war. Things will continue to accelerate if nothing changes with online censorship and account shut downs. The only permitted right-wing discussion will be pre-approved by the politically correct kosher-certified blue check-marked trusted flaggers.

Originally published at: Fash the Nation