The President gets it! Now we just have to hope that this is another promise that Donald Trump will keep, because he is the only man on the Planet with the power to ensure free speech on the WorldWideWeb.

‘Speaking loudly and clearly for the Trump Administration, we won’t let that happen,’ the President tweeted early Saturday morning.

‘They are closing down the opinions of many people on the RIGHT, while at the same time doing nothing to others.

‘Censorship is a very dangerous thing & absolutely impossible to police. 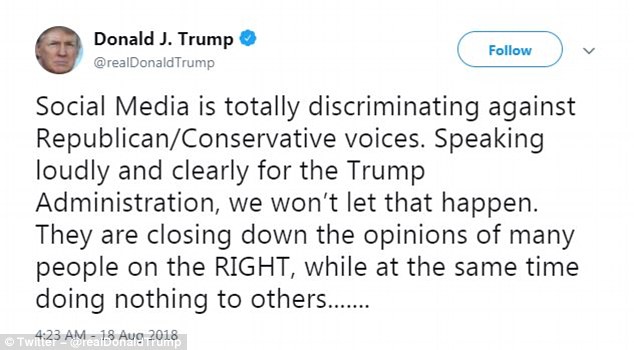 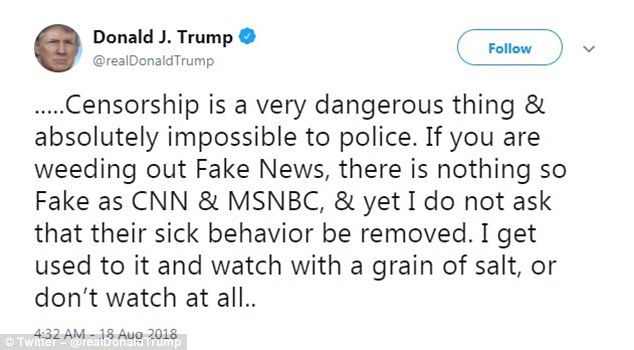 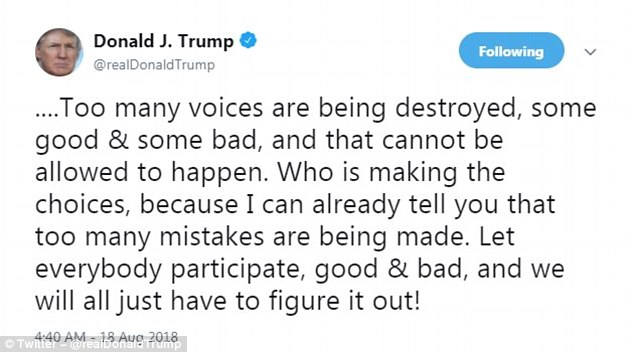 Though Trump was not specific, he was likely reacting to the recent decision by tech giants Google, Facebook, Spotify, and Apple to ban the controversial conspiracy theorist Alex Jones.

Earlier this week, Twitter Inc banned Jones and his website Infowars from tweeting for seven days, saying their tweets violated company’s rules against ‘abusive behaviour’ – in reality any comments or images that offend liberals or refute their crackpot far-left ideas.

The attack on Info Wars is only the tip of an iceberg of thoroughly illiberal censorship by Big Tech. As the KTI have said repeatedly, this is much more than the left being ‘sore losers’. The censorship drive aims to ‘deplatform’ (i.e. gag) EVERY voice which will speak up for President Trump and the American Constitution when the elite move to impeach and remove him.

And, in the UK, for a real Brexit when the elite try to deliver a ‘deal’ that fails to deliver what the people voted for.

It is also part of a campaign to restore the corporate monopoly over the formation of public opinion, which is why whatever Mr Trump does to address this problem will be attacked hysterically by every single ‘mainstream’ news outlet in the english-speaking world.

The Big Tech assault on free speech over the last year has been devastating, destroying not just dissident but hugely popular platforms, but also wiping out thousands of small and medium sized businesses and fund-raising operations.

The President is absolutely right in his analysis; let us hope that he puts the same amount of work and intelligent thinking into his plan to bring Big tech to heel and restore free speech online. His future depends on it, as well as a great deal else. Let us hope and pray he gets it right, first time.