Poland's lockdown-happy, vax-obsessed political elite have reacted hysterically to the appearance of a banner connecting their extremism to that of the Nazis. The banner featured the words 'Vaccination makes you free' on an arch shaped to echo the one that reads 'Work makes you free' outside the Nazi concentration camp at Auschwitz.

The controversial message appeared at a Polish Covid vaccine protest run by traditionalist Catholic politicians of the Confederation party against Poland's programme of forced vaccinations. It was promptly condemned as 'shameful' and 'mindless' by Poland's prime minister and the Auschwitz Museum.

In fact, the cynicism of both slogans is indeed well-matched. The inmates at Auschwitz were forced to work as slave labour in the camp, which included a vast industrial complex for the manufacture of artificial rubber for the Nazi war machine; however hard they worked there was no chance of them earning their freedom. Vaccines were also promised to deliver everyone who had them into freedom, but more recently we have learnt that they do no such thing, with those who have accepted jabs being forced to wear masks and endure restrictions and lockdowns just like people who have remained vax free. 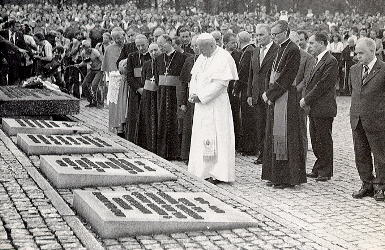 Pope John Paul II during his 1979 visit to Auschwitz, where he prayed at the memorials to the four million murdered at the notorious camp. The official figure has now been revised down to 1.1 million,including deaths from disease and starvation as allied bombing destroyed the infrastructure and supply lines of Nazi-occupied Europe.

Here too we see parallels with the elite's Covid-plague hoax, in which the real total of victims crashes the moment the distinction is made between 'died of' and 'died with'. Overall, however, the best parallel of all is between the extreme totalitarianism of the Nazi regime as it set out to create its 'New Europe' and that of the elite now using Covid-19 as the excuse to reshape and dominate the entire world.