In response to President Trump’s accusation that Twitter is secretly “shadow banning” Conservative and Pro-Life and Christian voices, Twitter released a vague statement claiming they simply “rank[s] tweets and search results” to ensure content is “immediately relevant” and addresses “bad-faith actors who intend to manipulate or detract from healthy conversation.”

“We do not shadow ban,” [Trust & Safety lead] Gadde and [product lead] Beykpour declared. “You are always able to see the tweets from accounts you follow (although you may have to do more work to find them, like go directly to their profile). And we certainly don’t shadow ban based on political viewpoints or ideology.”

Their explanation did not convince many conservatives, with many highlighting the “more work to find them” line for ridicule.

Twitter’s latest explanation for their algorithm amounts to “bury[ing] Republicans for something totally out of their control,” the Daily Caller’s Peter Hasson noted. “Twitter’s algorithm likely suppressed the Republican congressmen because the wrong accounts ‘engaged’ with theirs, they said.” 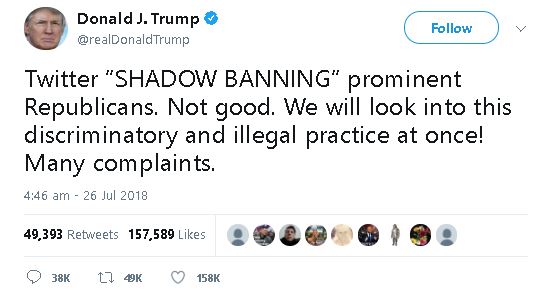 At Breitbart, John Nolte wrote that Twitter’s explanation effectively admitted that, “although you have gone to the trouble of following someone’s Twitter account, and have done so specifically because you want to read their tweets, Twitter is interfering in this process.”

Thankfully there is a multitude of lawsuits pending against Twitter and when they are dragged into court and required to hand over all their files on their censorship policy, we may well see their censorship czars walking from the courts with egg on their face and a new dawn of free speech on social media on the horizon.

For too long liberal authoritarianism has been given a free hand to silence their opponents by the political establishment but with Trump’s intervention and their user-ship and profits in free-fall, they are scurrying to limit the damage done and their power to hinder the silent majority is on the wane.