White Helmets to be Resettled in Western Europe

Hundreds of hardcore anti-Assad insurgents and their families are to be resettled in Western Europe thanks to meddling in Syria by ‘our’ political elite. While these "medics" have been caught on film helping to execute prisoners, however, their main role has been as propagandists for terrorist groups in Syria.

The evil thugs in question are members of the so-called ‘White Helmets’. Unlike their ‘brothers’ on the front line, they did not (usually) carry guns and knives with which to kill the brave men fighting to save secular, tolerant Syria from a Jihadi take over. Instead, they used video cameras and faked ‘atrocity’ scenes in efforts to get Western war planes to do the job for them.

But with their throat-cutting friends being crushed on the battlefields of Syria, the White Helmets are in trouble. Which is why the liberal elite in the West are now pulling out all the stops to rescue them. 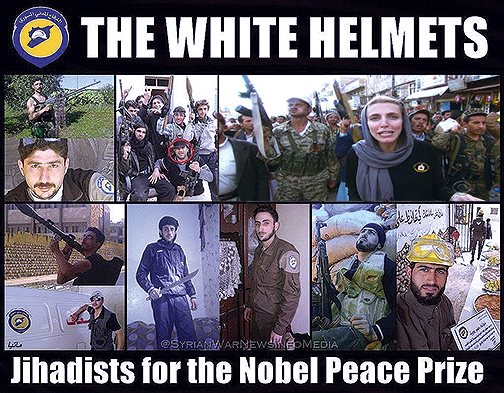 Canada, Britain and France have been joined by the USA in urging Israel to step in and organise the evacuation of all the White Helmets who had holed up in the shrinking strip of ISIS-held territory on the Syrian/Israeli border – and to arrange to transfer them on to Europe.

Yes, you read that right: Committed Jihadi propagandists who have been happy to work with ISIS are being moved to our countries, with the help of our governments and Israel! Here’s part of a report on the operation in the Israeli newspaper Haaretz:

“Evacuating hundreds of people from Syria into Israel with the support of Canada, the UK, Germany and the US was an unprecedented level of international cooperation. In addition Syria is an enemy state and the war was closing in on the men and their families in need of evacuation. This was a key part of the emerging crisis over the weekend, it was not just 90 members of the White Helmets, but also their families, an estimated 800 people.

“The UNHCR was contacted by the US, alongside the UK, Canada, Germany while Jordan authorized the UN to receive the Syrians who UNHCR agreed were “at risk and seeking asylum and solutions in above mentioned countries.” While in Jordan UNHCR would work with the three governments to support a “temporary stay.” This was a key to Jordan’s agreement: A special legal assurance the White Helmets would move on to the West.”

The same report confirmed that the so-called ‘humanitarians’ were extremely close to ISIS:

“With the UNHCR on board and Jordan agreeing to host them temporarily, the operation could proceed. In the day before it began the Syrian regime and Islamic State began a massive battle not far from areas where the White Helmets and their families were sheltering.

“Another problem faced at the border, according to foreign reports, was that checkpoints and fighting with ISIS, which had gone on all day Saturday before the evacuation began, hampered efforts.”

Meanwhile, Israeli efforts to prop up the collapsing remnant of the ISIS territory on its border included shooting down a Syrian jet which was bombing ISIS.

The Israeli Defense Forces (IDF) employed two Patriot air defense missiles to shoot down a Syrian Su-22 warplane involved in the Syrian Arab Army operation against ISIS in the area. One pilot, Colonel Umran Mare, died in the incident.

Syria’s victory over the ISIS monsters now looks certain. Equally certain is that the terrorist-propaganda teams of the White Helmets now being flown to the West will take their taxpayer-funded houses and benefits, and then settle back down to the job of spreading support for Jihad among the Muslim populations of Britain, France, Germany and every other country whose ‘leaders’ are stupid enough to take in these ‘vicious snakes’.